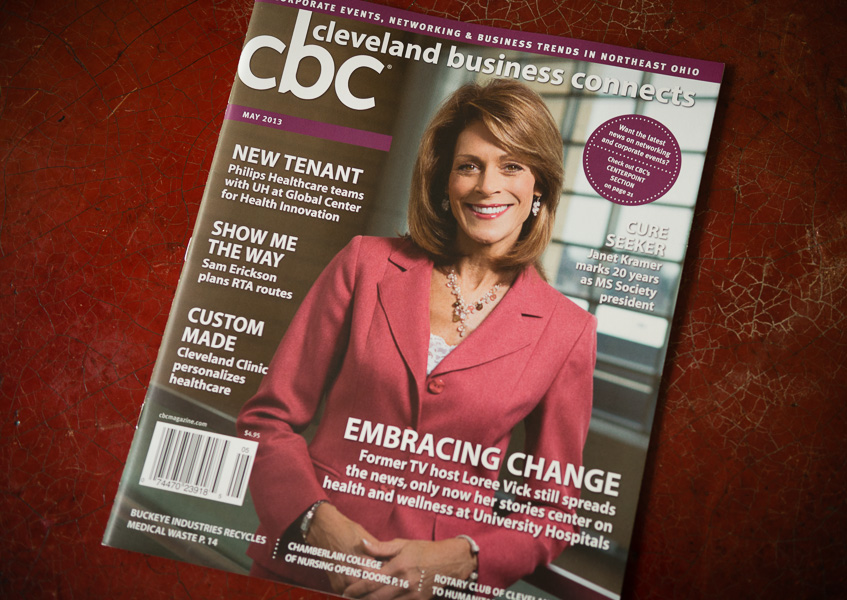 The May 2013 issue of Cleveland Business Connects magazine was a huge one for me—three stories (one a hold-over from April), including the cover.

The cover shot was a last-minute addition to my schedule. But you get an email asking if you want to shoot magazine. Um, let me think about that a second … yeah!

This is how it went: email on Friday afternoon, can I shoot next Tuesday? Oh, and by the way, the magazine’s offices will be closed on Monday too. It was a busy week, but as luck would have it, Tuesday afternoon was free. The magazine’s theme for the month was healthcare, so the subject was Loree Vick, spokesperson for University Hospitals.

We made arrangements between all the parties (magazine editor, art director, hospital PR, subject, and photographer) by email that weekend, and chose the UH Ahuja Medical Center in Beachwood for the shoot. The hospital is just two or three years old, so it looks great. CBC had done a cover shoot there about a year ago, though, so we had to be careful not to duplicate that view.

This might be an appropriate point to note that shooting a magazine cover is different than just making a nice portrait. The main difference is composition. A cover shot is going to be vertical, obviously, but you also have to leave room for the magazine title and all the text and other information that goes on the cover as well. Knowing that CBC magazine’s cover “hardware” runs mostly on the left, I planned to pose Loree farther to the right of the frame than I would have for a normal portrait.

I arrived early to scout the location. With the help of the hospital’s PR representative, I chose two locations to shoot in: looking out from the second floor atrium for the cover shot, and a small waiting area behind the reception desk for the inside shot.

Loree arrived right on time, and discussed wardrobe with the art director while I made a few test shots. They decided what she was wearing was perfect, so we got right to work. Loree was great to work with. As a former television news anchor, she’s used to being in front of the camera and, of course, naturally photogenic. She gave me a variety of poses and flashed her million-dollar smile. Five minutes later, we had the cover shot nailed down and she graciously helped move the equipment downstairs.

Having pre-planned the second shot, it only took 15 minutes to move and set up. Loree sat down for another 5 or 6 minutes, and we had the inside shot. I packed up, and went back to the office to start the post-production.

The other two stories I photographed for the issue were pieces on the Rotary Club of Cleveland and Sam Erickson, a planner for the Greater Cleveland Regional Transportation Authority (RTA). The former was the first commission I received in Cleveland. I met Mark Wipper (president), Jerry Jarzabek (past president) and Karen Melton (president elect) at the Nautica Complex on the Flats right after the monthly Rotary Club meeting. Like most places in Cleveland, the Nautica Complex is new to me, but I love the challenge of quickly finding locations in places I’ve never been before.

For the RTA story, Sam and I connected at the East 93rd Street station of the award-winning HealthLine bus rapid transit system. The weather was less than ideal for that shoot—the temperature suddenly dropped about 20°F as I arrived—but Sam was prepared and we got the shots we needed before she hopped on the bus back to work. 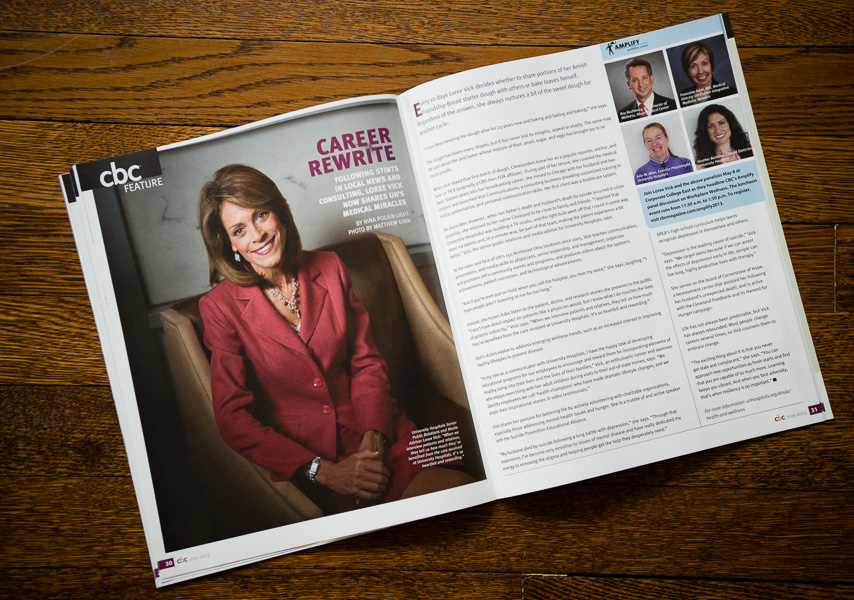 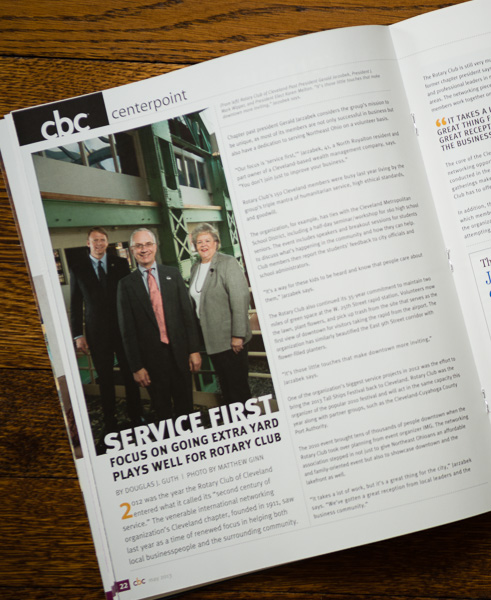 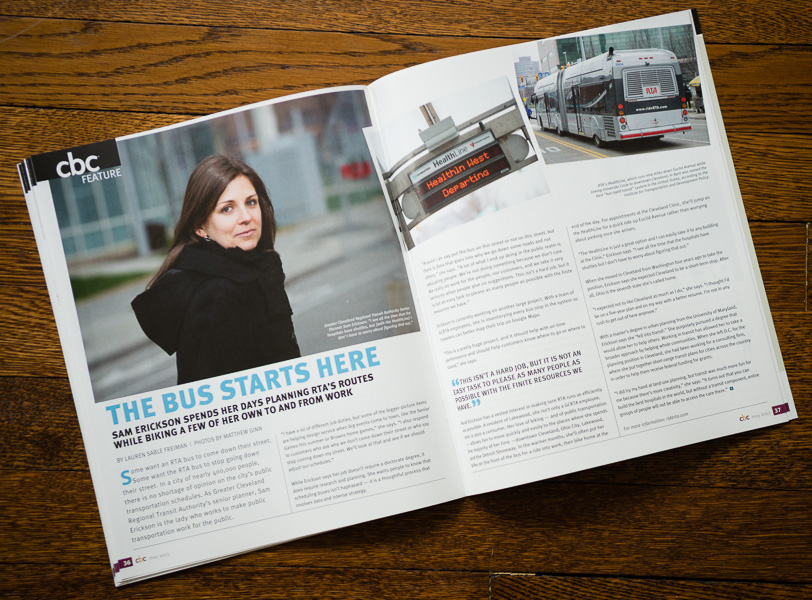