My favorite photos from 2013, and why I like them

Following up on last year’s favorite photos post, here are my favorites from 2013. Three of these are from Portland, before we moved—feels like another life—and the rest are from Cleveland and environs. In no particular order: 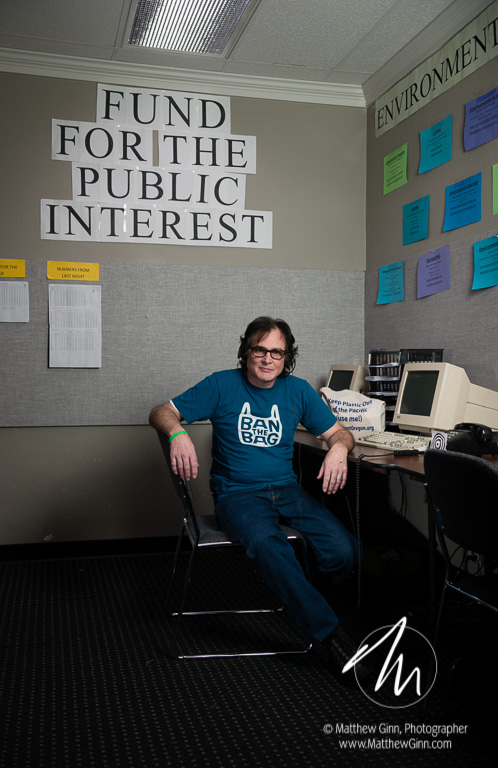 Ken Eshelman is a staff member of the Fund for the Public Interest, which is an umbrella fund-raising organization for the members of the Public Interest Network. The PIN is an association of environmental and progressive organizations covering most of the United States. I photographed Ken in a couple of different outfits in the call center his organization was temporarily working from while their offices were renovated. We got a number of good shots from the session, but I particularly like this one because it has the space to show Ken and his work environment. I think you really get a sense for what he’s about. 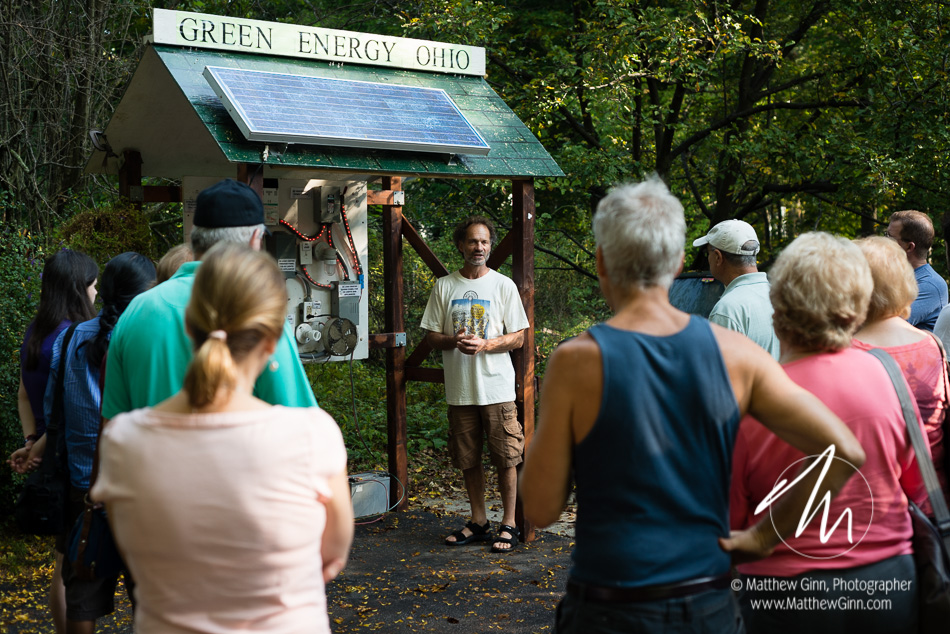 Sticking with the environmental theme for a minute, but shifting from Oregon to Ohio, I had the opportunity to photograph part of the 2013 Green Energy Ohio Tour in October. Here, solar energy enthusiast Tom Rapini teaches a busload of tourists the basics of photovoltaic circuits. I produced a whole photo essay covering the tour, but this picture stands out as the one that summarized the whole story in a single frame. 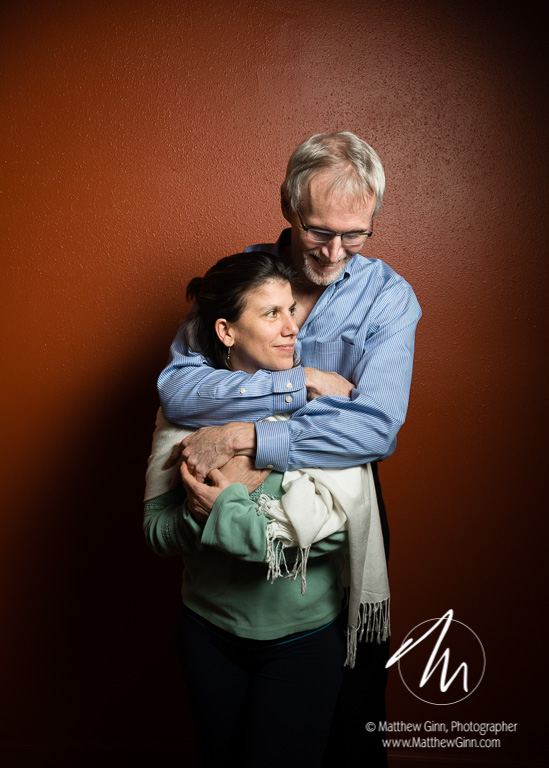 Back in January, I was asked to photograph Jay Gregory and Sarahjoy Marsh in preparation for a Valentine’s Day story. The couple conduct a workshop called “Learning to Love” at the Daya Foundation in Portland. They had warned me that they were a bit awkward in front of the camera, and that was evident from time to time, but in this frame I think we caught a beautiful, tender, genuine moment. Add the convenient red wall from a vacant office in their building and voila! 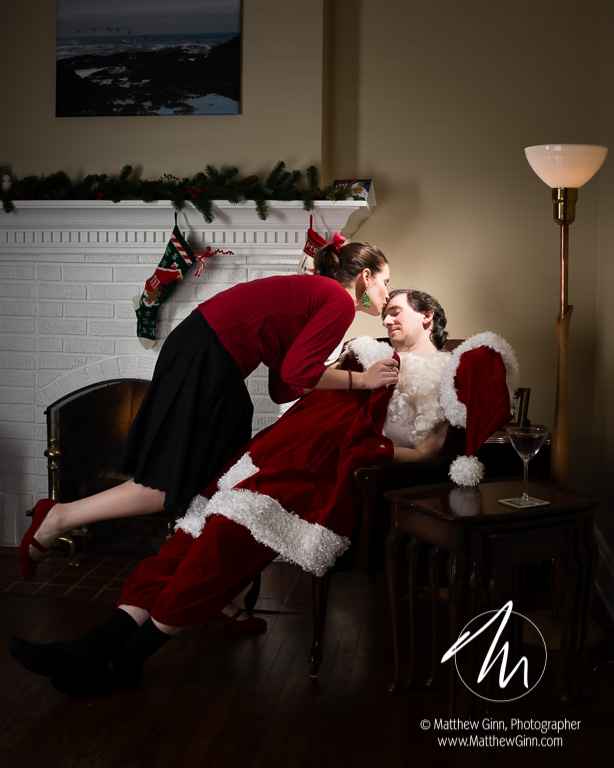 Speaking of tender moments, I’m particularly happy with our Christmas photograph from this year. Obviously it’s more staged than most of my work, but I like it because we were able to come up with a story and execute the photo almost flawlessly. 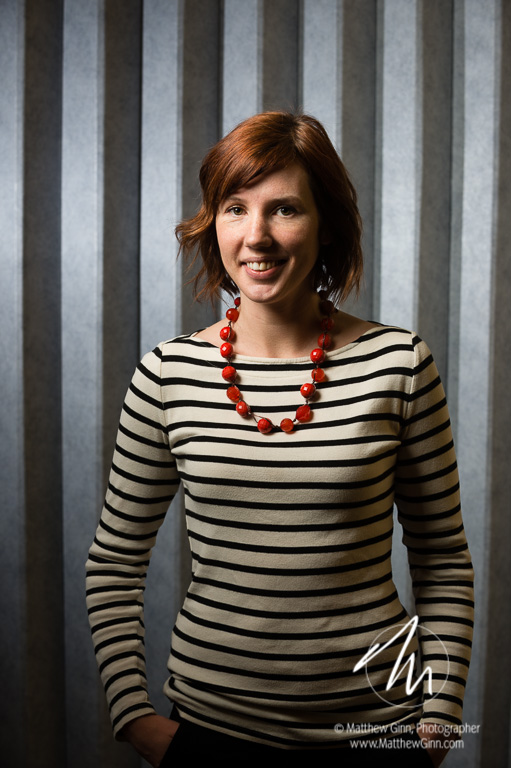 Part of being a good photographer is having a plan, but I don’t mind admitting that serendipity can make the difference between “meh” and “nice!”. Like my portrait of Ashley Carroll, who has the wonderful government job title of “Abuse in Later Life Project Coordinator for the Children, Youth & Families Division of Clackamas County’s Health, Housing & Human Services Department.” As with much of my work, I hadn’t met Ashley or seen the location until I arrived at the shoot at a community center in Oregon City. All of the potential backdrops were covered in signage, educational posters or windows, except for this one accordion wall that divided a large meeting room in two. With one light splayed across the accordion wall it made for an interesting contrast with the horizontal stripes of the shirt Ashley had chosen to wear that day. The color of her hair and necklace offset the otherwise monochromatic photo perfectly. 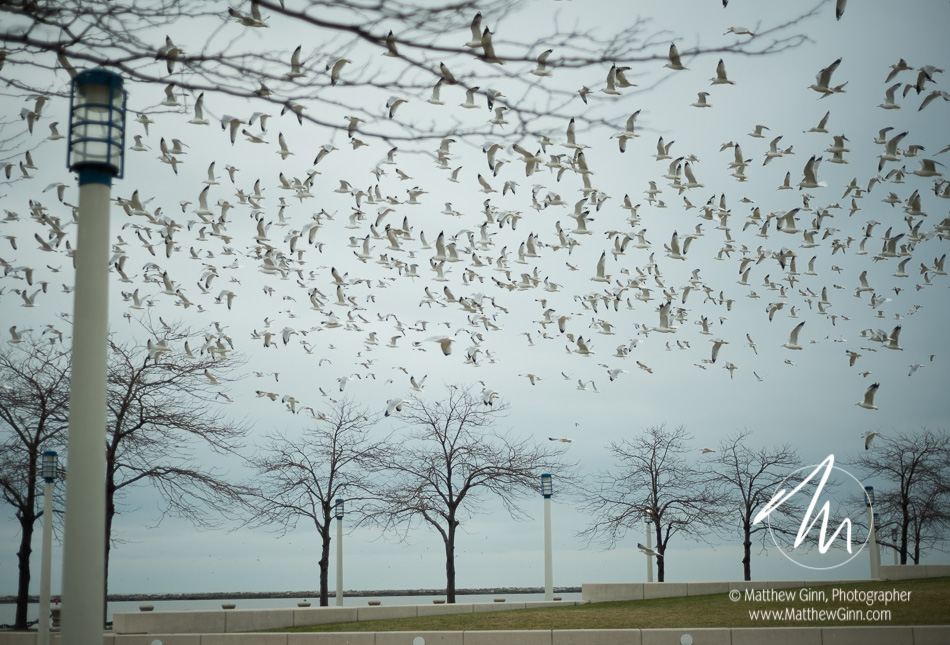 In another example of fortune meeting preparation, back in January, on a pre-move visit to Cleveland, I brought my camera down to Voinovich Bicentennial Park on Lake Erie. After snapping a bit of this and that I saw a huge flock of seagulls sitting on the grass nearby. It looked like there might be an interesting photo there, so I slowly approached the flock, making pictures as I went, wondering how close I could get before they were disturbed. I got my answer before I got close enough to capture the picture I had envisioned. All of a sudden the whole flock—several hundred—took to flight around me. I instantly realized that this picture would be better than the one I had been working on (not that I had a choice), and started hitting the shutter, trying to frame something nice before the flock dissipated or got too far away. This is what I got, something that, I think, captures a drab wintery day on the Great Lakes pretty well. 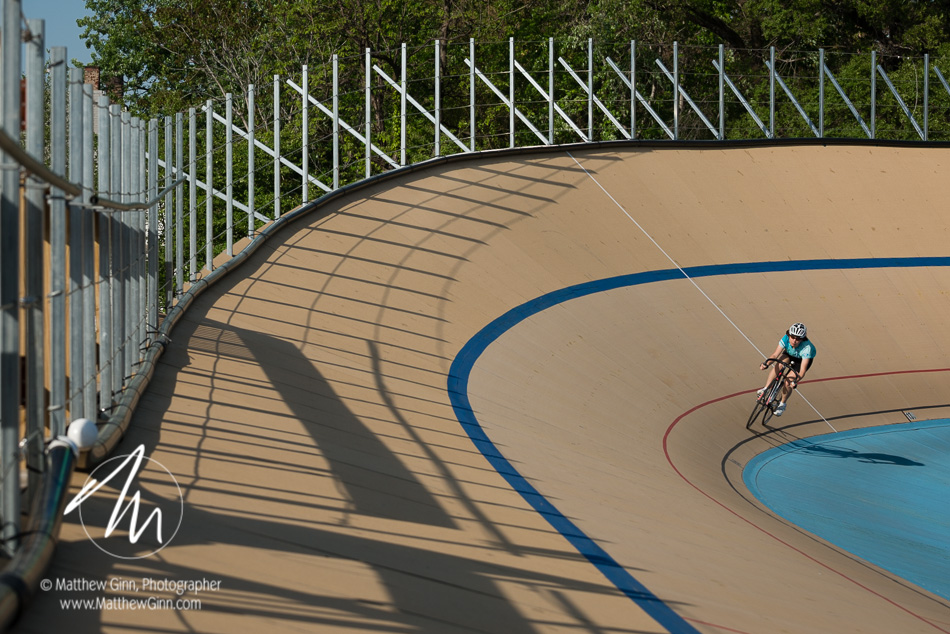 In contrast to the seagulls is my photograph of cyclist Daniela Mehech on the track at the Cleveland Velodrome on a scorching day in May. This image was actually part of a photo essay I made that evening. Track cycling is fun to watch and photograph, because there are great lines and lots of little dramas in the action. Some of the most dramatic action comes in races where you have multiple cyclists on the track at once, but for the riders, much of the work is done on the track alone. I like the way this photo captures that solitude. 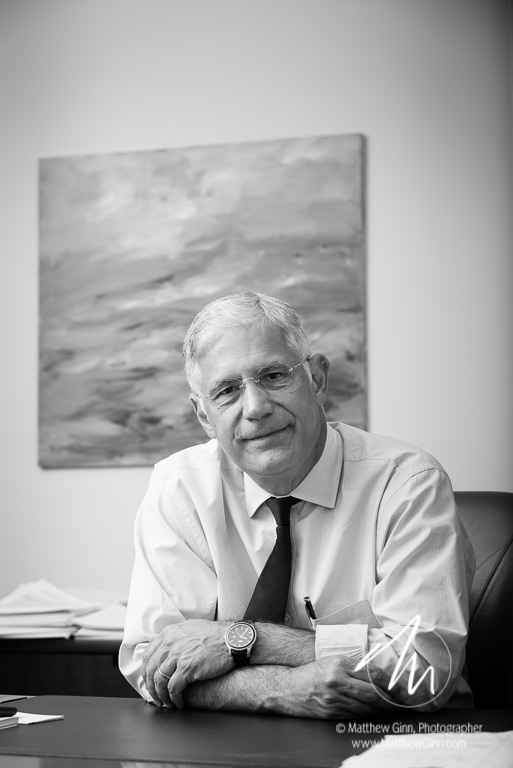 I don’t often work in black and white, but sometimes that is the right answer. I like this portrait of Dr. Patrick Catalano for its simplicity, and how it captures a fairly reserved man pretty honestly. 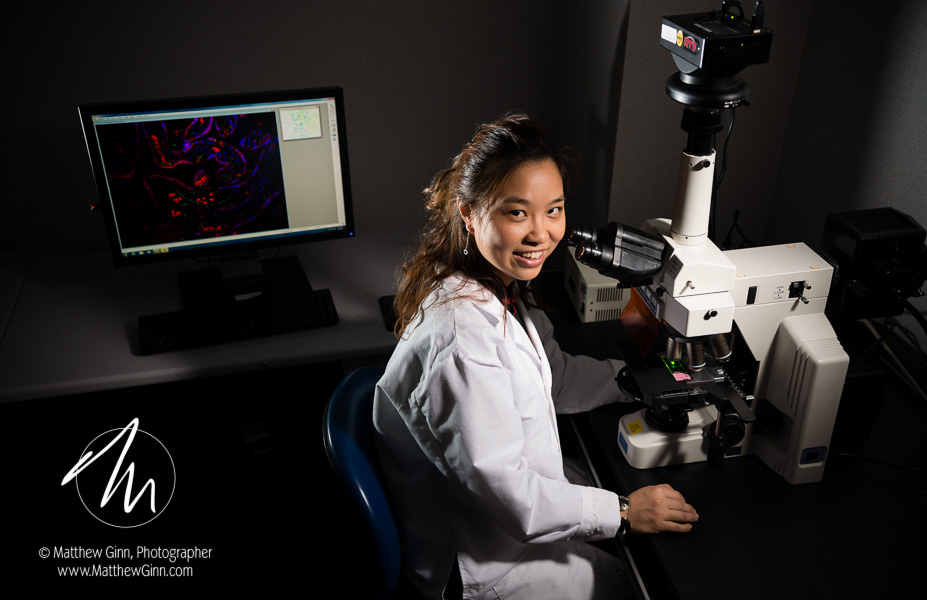 Back in June I did a series of photographs of doctors and scientists for MetroHealth’s Center for Reproductive Health. The above portrait of Dr. Catalano was one. My other favorite from that shoot was this picture of Dr. Judy Yang at the microscope. Tucked in a tiny, dark room, this was one of my most technically difficult photos of the year. We had to balance the ambient light from the computer monitor with the strobes to light our subject. The main light was stuck on a stand protruding through the doorway. I stood up on a step stool or table or something to look down on her. It wasn’t quite right, though, until we added a secondary light (tucked just out of the frame to the left) to highlight her hair. The best part was that the same light also gave a rim to the computer monitor and gave some depth to the space behind the microscope. Three benefits from one little light! 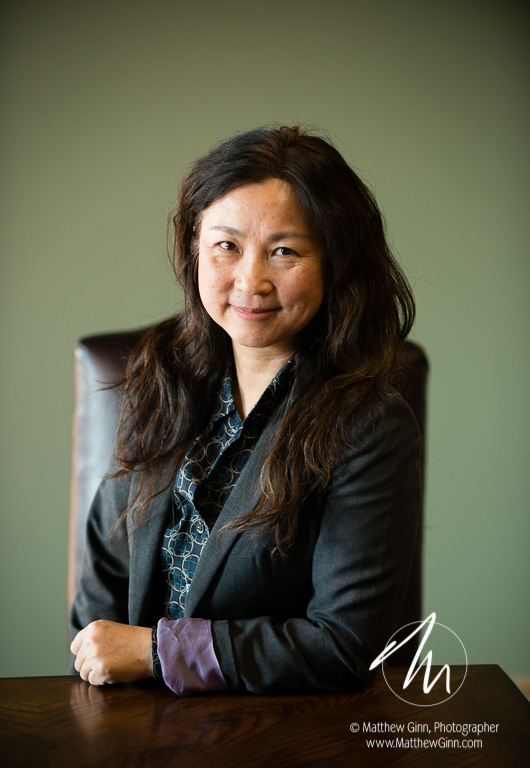 In stark contrast to the previous photo’s lighting challenges, this portrait of Dr. Chan Wang was a breeze: no supplemental lighting at all! The light in her office and its lobby area was fantastic on its own, so it was better not to try to improve it. Add a good subject and some nice furniture and you’ve got a great portrait.

I shot one more photo on Dec. 30 that might well make the list of my favorite photos of 2013, but unfortunately it hasn’t been published yet. I may include it in a future blog post or, depending on what else I shoot this year, it may end up in my favorites of 2014. Happy new year!